Java? Python? C#? which programming language matters most in 2019?

Which programming language is actually worth knowing in 2019? Checking PYPL, the Popularity of Programming Languages index, we’ve discovered how often language-specific tutorials are searched in Google. So what have Internet users revealed to us?

New at the forefront is Python, which has deposed the long-standing king – Java – from its throne. What is behind its growing popularity?

The key to its success is its simple syntax. The code is clear, airy and easy to read. Python is relatively easy for beginners. It does not unnecessarily burden them with semicolons and brackets. Instead, they can focus on developing their algorithmic thinking. Of course, simplicity does not mean we can forget about formatting code. In Python, you need to be very careful about proper indentation and structure.

Many programming languages have a funny story behind them. With Python, we are entertained by Zen Python’s collection of ideas, in which the creators summed up the philosophy of the language in an original way. Zen Python contains 19 principles, among which we find such gems as “Nice is better than ugly”, or “If the implementation is difficult to explain, it’s a bad idea”.

In general, Python is considered to be a language suitable for smaller applications. Although larger tools are being developed, they are slightly more difficult to maintain. Python also has the ambition to become a successor to languages such as MATLAB or R, specializing in mathematical computations and modelling.

In recent years, Python has been increasingly appearing in primary and secondary schools. Although most schoolchildren learn to program in Delphi or C++, the pioneering teachers are starting to use Python for this purpose.

But let’s go back to the technical facts. Java is an object-oriented language that follows the WORA statement, i.e., “write once, run anywhere”.

This concept was revolutionary in its day. In short, a Java program can be written on any device, but when compiled into a standard byte code, it runs on any (other) device that has a Java Virtual Machine (JVM) installed.

JVM is a virtual machine that allows a program written in Java to be run. That is, the code is completely independent of the type of processor or operating system.

Thus, Java was the first technology to allow programmers to move away from solving detailed technical issues and instead focus on program efficiency.

Today, Java is probably the most “mainstream” language in the world. It is used in many places, in web applications and in mobile games. It is also relatively user-friendly specifically when you need to debug. It is also very secure. For example, it allows unknown codes to be downloaded and run in a secure environment.

Whether that made you laugh or not, if you have any JavaScript experience, you must admit that it is not one of the most intuitive languages. It is a scripting language that is mainly used for creating websites. Despite its name, it is not based on Java: its creators were inspired by the language of Self.

The growth of JavaScript started the development of front end programming and user interface development. It is estimated that almost 95 % of websites in the world currently use it. It is experiencing a big boom, especially on the back end.

JavaScript runs equally on all browsers, develops quickly, and has a large community.

Its advantage is that it can be easily combined with other programming languages and can be used in many large applications. Code written in JavaScript can even be embedded inside scripts written in other languages (such as PHP).

C# or C Sharp is an object-oriented language that was developed by Microsoft. Based on Java, fans consider it a more sophisticated and higher-developed language than its more popular cousin.

C# has a similar syntax to C, C++, and Java. It allows applications to be linked with C or C++ libraries without major complications. It has good graphical support that is useful, for example, when creating window applications.

It is mainly used in business and commercial applications.

Mainly used for creating web applications, PHP is the last of the 5 most popular.

It is a server-side scripting language, originally used to create dynamic content or images on a page. It is often – incorrectly – considered to be a simple site-only language development, but PHP handles more.

PHP is compatible with most web servers, operating systems and platforms. It is a high-quality object-oriented language that has undergone great development and fine-tuning, especially in its latest versions. A big plus is the huge support in the form of readily downloadable packages for use in one’s own projects.

Are you crushing one line of code after another, or are you just a rookie programmer? Check out our free positions and choose the one you like best. If you want to better your career and know how to think on your feet, Innovatrics will take care of the rest.

END_OF_DOCUMENT_TOKEN_TO_BE_REPLACED 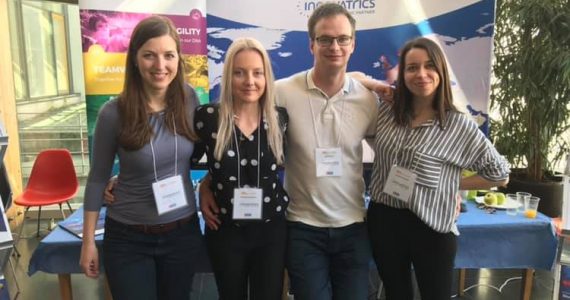 Innovatrics Goes Back to Its University Roots